In more exciting news for the Balmain Para Rowing Program, Rowing NSW has confirmed the NSW State Teams to compete at the Nationals and we’re bursting with pride to announce that JAMES TALBOT has been selected to represent New South Wales in the Men’s PR3 1x Interstate race. 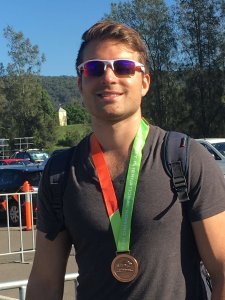 In being selected he has beaten a very spirited push from athletes from Sydney Rowing Club and others.  With James’ selection Liam James, Head Coach, Para Program,  has also been selected as the NSW coach for that same event.

James’ race will be on Sunday 25 March (though he, Kevin, Ruby and Matilda, as well as Eoghan from Liam’s Open Men’s squad in the MU21Lwt categories) will be racing through the previous week.

Congratulations James and Liam, may you bring home a fantastic Blues success!
Let’s get a contingent out there to cheer James on and show him support and wish him every success.
GO YELLOW BLACK AND BLUE !
CategoriesUncategorized
TagsBlues ForeverBring It On AustraliachampionJames TalbotNSW Champion
Share
FacebookTwitterLinkedInPinterestStumbleuponEmail